"We are working to end modern day slavery" says Hamzah 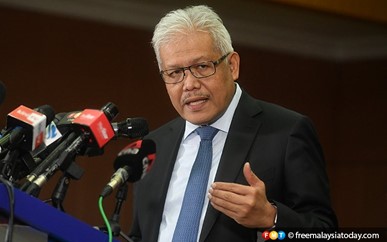 Jakarta : Malaysia is committed to continue fighting modern slavery holistically so that its victims can be protected, said home minister Hamzah Zainudin.

He said the government’s focus was not solely on managing the entry of foreign workers but looking at effective methods to reduce the problem of human trafficking and forced labour.

“So that is why I have come with senior officials to solve legal problems and at the same time to inform our counterparts of what we are doing,” he said.

Hamzah said this at a dinner yesterday with more than 100 Malaysians residing here in conjunction with his working visit.

He was accompanied by the Chargé d’Affaires of the Malaysian Embassy in Indonesia Adlan Mohd Shaffieq, Inspector-General of Police Acryl Sani Abdullah Sani and immigration director-general Khairul Dzaimee Daud.

Hamzah also explained that human trafficking and forced labour are cross-border issues that occur in many countries, whether developed or developing.

However, this matter is still unresolved despite various laws being enacted by the International Labour Organization.

In another development, Hamzah said the government was reforming the management of foreign workers by introducing an e-locker system and setting up the Single Border Nucleus Agency to strengthen control at the country’s entry gates.

The Malaysia My Second Home or MM2H programme has also been improved to ensure that only foreigners who fulfil certain criteria are eligible to enjoy the facility.

“We will do our best to rectify the country’s problems at the borders,” he said.

As part of his visit, Hamzah had a meeting with his Indonesian counterpart, Muhammad Tito Karnavian and minister of marine affairs and fisheries, Sakti Wahyu Trenggono.

He said Malaysia and Indonesia had agreed to combat illegal fishing in the two countries’ territorial waters via joint patrols.