An annual worldwide campaign to bring awareness to and call for prevention & elimination of violence against women and girls.

It was first launched by the Center for Women’s Global Leadership in 1991, and is used as an organizing strategy by individuals and organizations around the world to call for the prevention and elimination of violence against women and girls. Additionally:-

The colour orange symbolizes a brighter future and a world free from violence against women and children. It’s a colour of hope. It also serves as a means of demonstrating your solidarity against all sorts of violence. 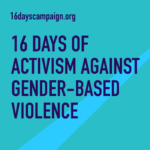 The booklet “16 Days of Reflection for the Nation” 16_days_booklet-2019.pdf aims to bring their stories to light. Spare a thought for these innocent victims some who have had their youth, or worse their dignity, cruelly stripped away.

Under the leadership of the UN Secretary-General, Guterres, the UNiTE campaign will mark the 16 Days of Activism against Gender-Based Violence, from 25 November to 10 December, under the theme, “Orange the World: Generation Equality Stands against Rape!”
Source : unwomen.org

** UN Women Executive Director’s Statement for the International Day for the Elimination of Violence against Women, 25 November 2019 **